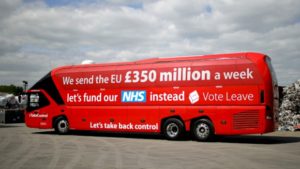 It has been a bad summer for truth and a good one for fear.
Anyone who followed the Brexit campaign saw leaders pedalling the most outrageous misrepresentations of truths (aka lies). Perhaps the most obvious was the ‘Leave’ battle-bus which trumpeted the opportunity to repatriate the £350m that we allegedly give to the EU each week and give it instead to the NHS.

Truth got savaged by every tactic in the campaign – deceptive use of language, selective or provocative images, obfuscation, or simply ignoring or denying facts. To cap it all anyone who entered the debate, even with a genuine position from which to express an opinion, forecast or set of questions found themselves immediately tarred with motives of malign self-interest and bias by those who did not like their comment.

The outcome has left little positive gloss on any of the most active participants – winners and losers. We have embraced a summer of political silence that sees everyone pleased that we are doing well in the Olympics so that our minds are off the sordid argument and the division that now besets the country.

Across the pond in the USA, we can see a spookily similar storyline being played out in the presidential race of Donald Trump. His rhetoric – simple ‘solutions’ for complex problems, ‘betrayal’ by politicians, thin-skinned anger at critics and naked showmanship is further dividing a political climate that few would have thought could have become more partisan.

I confess to being disappointed at the perceptiveness and judgement exercised in the public space. It is as if people don’t care about truth nor understand the importance of testing what they hear. They merely make up their mind and then pick any argument however valid in defence of it.

History could have reminded me of this response had I paid attention. Yet doesn’t our society pride itself on being smarter than past societies? Despite living in the age of the ‘prosumer’ and savvy consumers of media, we don’t seem to use our expertise to judge leaders’ character and rhetoric.

Many leaders often spend a lot of time crafting carefully the content and clarity of their messages and decisions – making sure that they are right and well communicated. Does the summer offer any lessons to add to the preparation?

What could we learn from this?

1. We live in anxious times

I have known for some time that people generally are becoming more anxious. Just two statistics: In the US, the average high school pupil today has the same level of anxiety as the average psychiatric patient in the early 1950’s. In the UK, the proportion of 15/16 year olds reporting that they frequently feel anxious or depressed has doubled in the last 30 years and is up to 20% of all teenage girls. The stress of modern life tends to be felt more strongly by certain groups – not those with the most responsible roles or high status but by the younger, the less educated and minorities.

The Brexit campaign crystallised around ‘fear’, for the economy vs immigration, and Donald Trump has managed to capture and mobilise the disenfranchised school-leaver, white demographic most hit by the loss of traditional industrial jobs in the USA (where he has a crushing lead of up to 40 points in some polls).

There are surely things to learn in this. We could learn a lot about how valuable it is to empathise with and articulate effectively the emotional anxiety of our people. Leaders need to be able to mirror well – reflecting the emotional concerns of people. Disconnected leaders do not communicate well.

Beyond this though we can see the vital importance of hope as a motivator. Fear acknowledged prepares for hope and people only buy into change when they see some hope of things getting better.  The summer shows that people expect leaders to tackle the right issues (their issues) with solutions – not ignore them and hope that they will go away.

Looking at those politicians who are achieving cut-through with the general public – like Trump, Farage, Corbyn – we tend to see those people who display their character and personality. They are not perceived to be working from a carefully worked script, not hedging their words or operating with subtlety. We may not personally like what we see – but where it resonates people respond.

‘Professionalism’ is seen as a mark of untrustworthiness and lack of edge.

People want to be led by people.

We should learn a lot from this (especially if it is married to integrity and grace). Leaders need to inject themselves into what they lead and how they approach it. Leaders really need to believe in where they seek to lead. Too often we can settle for too many lowest common denominators to build a coalition needed to win support and lose sight of this.

3. Leaders are not as impactful as they presume

Leaders spend a lot more time thinking about their context and agenda than those whom they lead. Most people are over-media-ed, under-interested and with a short and emotional attention span.(Should we be thanking the internet for this?)

The result this summer in both the US and the UK has been no critical assessment of what a leader says, the happy ignoring of changing policies and messages, and no probing to understand exactly what people mean when they announce their latest thoughts.

The learning points from this for leaders though are a bit of a curate’s egg.

Firstly, for most people, what leaders say is simply not as important as leaders think it is. Even in business leaders are nowhere near as relevant and impactful as they believe. In 2013, when McKinsey examined the engagement of frontline workers using their Organisational Health database they found that leaders overestimated their ability by over 60%! Hence why most workers remain disengaged in their jobs.

As leaders we need to understand the small part that we play in most peoples’ lives – even if they work for the same organisation as us.

This means that it is vitally important to find the best routes and topics to engage with people – so that we really need understand and communicate with constituencies well. It also means that the soundbite and our personal story and its relevance are very powerful tools to influence effectively in these topics.

Perhaps my overwhelming observation of the campaigning of this summer is that in the end it was emotional psychology rather than rational thought that shaped outcomes to date. The arguments that won tapped into the big fears of a fractious and worried population who anticipate that the future is not better than the past and that their dreams for life are cracking.

The casualties of this have been facts, assumptions, logic, reasoning and objectivity. We are a generation that thinks with our feelings.

We might decide from this that logic is not a powerful motivator. However, we should perhaps learn that when facts do not seem very compelling to people, it may be because they are not the most important ‘facts’ – witness the new spotlight in the press being focused on the ‘losers’ from globalisation (the less educated in our society) and the acknowledgement that the winners in our society need to do more about it. We need to start with the issues and work back to the facts – not the other way round.

As we thankfully see cracks emerging in the Trump bandwagon there are perhaps two final points that spring to mind.

Firstly, truth remains constant and make a habit of reasserting itself over time and shaping the legacy of leadership. It is always good to keep this front of mind when leading – and lead into it not away from it.

Secondly,  leadership is not for the fainthearted…a more anxious, less attentive, more fragmented populace facing more headwinds than in recent history is not an easy group of people to lead in whatever context leadership is needed. So, lead where you really care.

Next week, I will blog about a lovely example of leadership that does exactly this and provides some great food for thought.

* I borrowed this observation from Robert Waterman (of ‘In Search of Excellence’ fame).