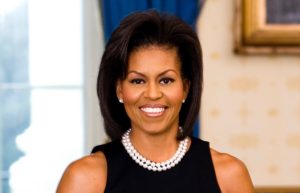 Do you ever wonder if your leadership makes a difference?

It can be difficult, especially in complex organisations or if you are a leader with a wide area of responsibility, to see what difference leaders make to the performance of those on the frontline of the organisation.

You may be able to see where poor leadership or decisions have disrupted and undermined work and commitment. But is good leadership merely the absence of negative impacts – or can it achieve more?

Well over the summer a study published by Economics Professor Simon Burgess at Bristol University shed a little light on the potential for an inspirational intervention by a leader.

As you may remember, Michelle Obama visited a big London girls comprehensive school on her first UK trip in 2009 and held audience with a group of students. I remember the television news covering a part of the encounter. It was exactly what you normally see on these sort of visits – a famous figure holding court with a class of teenagers. “Ho hum,” you may say.

Yet as Simon Burgess reveals in his study, as students graduated through the school, the academic results of this group of girls started to rise markedly: a little in 2010 and then markedly through to 2012.

The difference between their results and what would be expected was fully 1-2 grades across 8 GCSE subjects – a move from a ‘C’ to an ‘A’. This is a massive difference and difficult to explain other than from the intervention of the first lady.

Her impact clearly was significant. Students describe meeting her in glowing terms: one word descriptions ranged from “Inspirational” to “Indescribable”, from “Awesome” to a simple but exuberant “Wow!”. One said, “I can still hear her saying to us: ‘You have to push yourself hard, because if it feels easy, you’re not trying hard enough’. I won’t forget that.”

Here was a leader who made a real impact.

What do we learn?

So what lessons can leaders draw from this? There must be many leaders and occasions where no such positive impact occurs – so why did Michelle Obama have such a strong inspirational effect?

Inspiration is a powerful tool

Firstly, it demonstrates how important motivation can be in achieving outstanding results. Michelle Obama has no role in the running of the Elizabeth Garrett Anderson School; no position of authority; considerable social and geographic distance from the pupils and no ongoing relationship.

She could really only have an impact in one way – through inspiration and this appears to have been the way that she has affected the pupils. Yet even though she has had only a slender contact and role in the lives of the students she has influenced them very positively through her inspiration. It is clear that this has helped to inspire more commitment to achieving the best academic outcome and provide real hope for the girls that they can shape their own future.

As leaders, especially in the low-hierarchy culture of the UK, we can often underestimate how much impact this ‘soft’ side of leadership can have. Espousing worthwhile values and goals that have resonance with people and articulating how people can live into them can be a great way to inspire hope – a powerful motivator of behaviour.

However, to do this well demands recognition of the opportunities of the role of the leader (and realism of the extent to which we have any ‘celebrity’ status such as that embodied in this example!). It also demands thought over the values to focus on, the role of those being led and the hope that can be offered. My experience is that we are often shy of doing this thinking which is critical.

It is vital to help people identify with you

Secondly, we need to understand the importance of establishing a genuine personal connection.

Michelle Obama has a great personal story of the ‘rags to riches’ variety, with a tough upbringing that she helped transform into a personal success story as she grew up. The honesty and power with which she used this story with the students – woman to woman – was clearly a key to understanding why the students were so impressed by her and how her impact spread virally through the school.

The great gulf that many leaders see between themselves and those they seek to influence is one that we see in the current political turmoil here (and in the USA) and one that needs to be bridged if   leaders are to exercise this level of impact. Understanding the importance of being open enough and engaged enough to allow others to identify with you is critical for effective leadership – as oppose to the often impersonal and distant management that many see in today’s organisations.

Thirdly, the story also illustrates the importance of follow through (especially if there is a genuine care for those being led). What I had not appreciated until I read the study was that even though Michelle Obama only visited the school the once, she continued to engage with pupils from the school so communicating her real interest in them. In 2011 she invited pupils up to Oxford to see her when she was there visiting and then in 2012 she invited 12 of them to come to the White House.

If as leaders, we really care about the significance and response to what we believe in then our behaviour gives it away and those we seek to influence can read it. Michelle Obama clearly did that with these students.

Connect with other potential influencers

Finally, the story provides an important lesson in establishing links with others who have common cause and profile. If you led this school then you would have been very pleased to have the opportunity to receive the initial visit but you might have still not have appreciated how much help an otherwise unconnected leader might be able to provide to enhance the performance of your students.

Positive messaging and role modelling doesn’t have to come from your own leadership team – it can be co-opted by bringing those who also share your passion on the same topic –  even local celebrities, political figures, alumni, media commentators and others could play this role. Leaders need to consider who might bring passion to key organisation values and then build connection with these individuals. They can make difference to your organisation.

The statistics behind the study are fascinating. Simon Burgess sought to isolate so far as possible this ‘Obama’ effect from all others to validate the conclusion. He comes to similar conclusions on the learning that can be gleaned from her impact.

However, what I particularly like about the story is that it is a beautiful example of a political leader using their position and success in support of a really good cause and one that is clearly close to their heart. May this always be so.