Principle 6: Work where you care 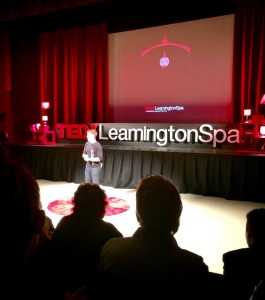 If you are a keen online user of the TED talks then, like me, you might have been quite excited at the prospect of getting along to a live TED event. So when Leamington held its first ever TED last weekend I was very pleased to be able to go along.

It was highly instructive.

It wasn’t just the content of the talks (which addressed topics as diverse as AI and music, overcoming fear, the Bloodhound world land speed record attempt and sex addiction). The quality was excellent and readily repaid sitting in a darkened auditorium on the only sunny day of the week.

In total, there were 16 sessions including 13 speakers, music and the alienZoo dance troupe. The talks followed the standard TED format – short and punchy, with the speaker stood on a circular rug in front of the big red letters of TED and the name of the location.

However, as much as the talks were great and the subjects and their narrators fascinating, the overriding learning from the day for me was not in the content, it was in the event itself. I came away with several lessons…

Frustrated, inspired or restive? There were several reminders throughout the event of the value that one person can create by running with an idea.

The event was organised by volunteers (for those who didn’t realise the ‘x’ at the end of a TED means independently organised) who, though working to a prescribed format, just decided one day to organise a TEDx in Leamington. Similarly one talk was given by someone who helped organise the video games ‘Backspace’ exhibition in Leamington a couple of years ago – and indeed launched her own business off the experience. Another had followed his own dream and used his experience to become a successful author.

In an era that can become hidebound by the need for training, qualifications and methods, the event showed just how powerful and vital it is to turn ideas into action and simply ‘do it’. The power is in the action.

Failing? Most people would want you to succeed

The event requires talks that must delivered with precise timing and a honed message. This ensures the quality. The result is that many speakers effectively memorise their script and deliver it on the day.

At Leamington, one person stumbled and stuck one minute into their talk. Despite trying to work around it, they could not remember what they had planned to say next.

They stopped and asked to restart. The audience?

From the very first moment of their difficulty, you could sense a deep well of support for them, willing them to remember their next line. Their request brought a huge round of applause cheering their decision to go back and try again. Next time through, no stumble and, at the conclusion of the talk, the biggest round of applause both for the talk and for the courage that fuelled its delivery.

When we read articles in magazines and newspapers which are often hugely cynical about people, it’s great to see that  in reality most people want each other to succeed and not to trip up, to prosper not to fail.

A spark is worth sharing

Quite a number of the speakers started on their subjects, sparked by something in their lives: challenges their children faced, problems they personally had to overcome, learning how to use a skill in new ways, loving a particular school subject. The immediate spark then became a flame.

We have great freedom to pursue our interests in leisure time and even in paid work. This privilege enables us to enrich our own lives as well as those of others. Too often we may not pay attention to those activities in which we really sparkle. Yet these can often be a source to steer a new path that benefits everyone.

Worth thinking about if you are engaged in something that produces little spark for you.

The nature of being human

Seeing so many speakers one after another reinforced the message that despite the importance of facts, analysis, organisation and logic, effective communication critically depends upon making an emotional connection with an audience.

This can be done in many ways: expressing genuine emotion, talking with engaging honesty, resonating with the values of the hearers, articulating what really matters. Each of these approaches caught the hearts and minds of the audience on Saturday.

It is easy to forget that we are not just human because we are smart but also because of our emotional makeup. Compelling human arguments make that emotional connection, in conversation and presentation.

I was left with a final phrase; a healthy little challenge to those of us who might  sometimes slip towards complacency…. “What’s your idea that’s worth spreading?”.

Now there’s a good question to ponder….I am sure there is a TED talk in that.